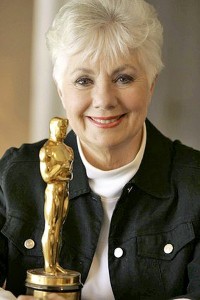 Danny Partridge’s mom could have been Carol Brady?  Shirley, you can’t be serious.

“It’s true,” admits Shirley Jones, “I was offered that role, but turned it down.”  Jones had made some thirty films by then, many of them cutting-edge roles opposite “every leading man in Hollywood” and was already an Academy Award-winning actress. “I somehow couldn’t see myself after all of that delivering lines like, ‘Honey, I think the roast is ready.’ ”

Yet a year later when a television series about a singing family was offered to Jones, she jumped at it, despite her agent’s warning that she would be typecast forever after as Mrs. Partridge. “I was a widowed mom who sang with her kids and was the first working mom on television,” says Jones. “That show had a lot more to say, and I loved doing it.”  And yes, unlike the rest of the cast, which were dubbed, Jones and her stepson David Cassidy did their own singing.

Still, don’t expect Jones to offer up any renditions of Partridge Family hits during an ultra-rare area appearance this week at the Paramount Theatre in west suburban Aurora.  “I leave that to David is my standard response.  He’s the one who really made those work.” 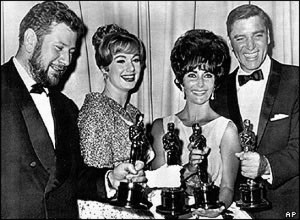 Jones is traveling with a thirty-two-piece orchestra—“In a bus, can you believe it? Although I get my own car!”—and with two other singers who join her in a musical tribute to Academy Award-winning music of the movies called “A Night at the Oscars” which hits the area just four days before this year’s Oscar ceremony. Jones herself sings songs from her best-loved musical films, “Oklahoma!” “Carousel” and “The Music Man,” as well as reminisces with the audience about her long career and the golden era of Hollywood. Ironically, Jones’ own Oscar was for a non-singing role, playing the blackmailing prostitute opposite Burt Lancaster in 1960’s “Elmer Gantry.”

Like many young girls born during the Depression, Jones was given the name “Shirley” by her parents because of their admiration for then-superstar child singing actress Shirley Temple.

Did they know something in advance?  “Heavens, no,” says Jones, “I doubt it ever crossed their minds that I would ever actually go into show business: we lived in too small of a town. Our family business was my grandparents’ brewery and my own ambition was to become a veterinarian.”

Still, the family knew that their daughter had extraordinary talent, even early on. “I was the youngest member of the church choir at 6 years old,” says Jones. “I cannot recall a time in my life when I was not singing.”

When Jones went away to a summer girl’s camp, a counselor noticed her “extraordinary instrument” and encouraged her parents to have her begin formal vocal study in Pittsburgh, some thirty miles away from the rural Pennsylvania community where she grew up.

“We drove out once a week,” Jones recalls, “and I was singing arias and all kinds of things I had never heard of before.  There was no opera anywhere near us, so all of this was quite a new world for me.”  While her teacher trained her as a coloratura soprano and wanted her to go into opera, Jones admits that was too alien and unknown of a world for her. “Besides,” she admits, “I was lazy. All of that having to learn other languages and the enormous discipline. I was more at home with Broadway shows and music and had grown up watching Judy Garland, Fred Astaire and Gene Kelly in the movies.” Nonetheless, Jones sang an operatic aria for the talent portion of the Miss Pittsburgh beauty contest and so astounded the judges that she won.

Jones also became involved with the Pittsburgh Playhouse during her high-school summers and not only sang and acted there, but “even learned how to paint scenery.” On a whim, a family friend told her that Rodgers and Hammerstein were having an open casting call while the family was visiting New York the summer after her high-school graduation, and Jones “went and stood in a line that wound a block and a half long,” hoping to get a spot in the chorus for one of three R & H shows that were playing on Broadway at the time.

When Jones was asked what she had done professionally by the casting director when her turn came at long last, “Nothing,” was her response. Jones sang for the director, who was so amazed at the sound coming out of her mouth that he went looking for Richard Rodgers to have him hear her for himself. “Yes, it was the voice,” Jones recalls, “but it also was that I really was an 18-year-old girl from a small town and had that all-American and naïve quality that they were seeking.”

“Would you wait here while I have my partner come over?” said Rodgers, and Jones swears that she had no idea that the man who was talking to her was the famous composer, and even asked him what his name was; “Rodgers,” was the gruff response.

By the time Oscar Hammerstein II showed up, Jones made another faux pas when he asked her if she knew any songs from “Oklahoma!” “I think so,” she told the show’s lyricist, “but I don’t know the words.” Since the rehearsal pianist had a plane to catch, Jones was asked by the pair to walk with them across the street to another theater where a full orchestra was rehearsing for a road show of “Oklahoma!” “The next thing I knew, I was up there with a score in my hands singing three songs from the show in front of a live orchestra.”

Jones became the only singer ever personally contracted to the R & H organization, and looking back, Jones says that it was clear that they were grooming her for the role of Laurie in the motion-picture version of “Oklahoma!” from the start while using her in other live shows, first “South Pacific” and then “Me and Juliet.” Jones was performing “Me and Juliet” here on tour at the Shubert Theatre—now the Bank of America Theatre—when her agent called with the news that her screen test had been chosen over those of such Hollywood veterans as Kathryn Grayson, Debbie Reynolds and Jane Powell who were all coveting the role. 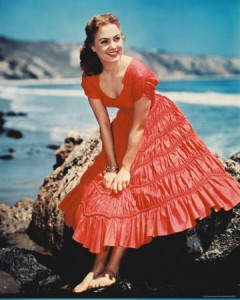 A smash hit, “Oklahoma!” was followed up by “Carousel,” with Jones cast alongside Frank Sinatra, who pulled out on the first day of shooting because everything was going to be shot twice, in CinemaScope and CinemaScope 55.  “Frank just got back in his car when he saw the two cameras and said, ‘You’re not getting two Sinatras for the price of one,’ ” Jones recalled. “We were stunned, because we had pre-recorded everything together, had done the costumes, pre-production and publicity stills, and he was so excited, telling me that this was the best thing that had ever happened to him.”

The rumor persisted for years that Rodgers was unhappy with Sinatra’s vocal handling of the show’s famous “Soliloquy.” “That could be,” says Jones, “but Frank would never talk about it, and I would run into him and ask him, but he just said, ‘I don’t want to talk about it, Shirley.’ I just recently learned from a mutual friend that Ava Gardner [Sinatra’s wife at the time] had called him and told him to get his you-know-what on the set of a film that she was making, or she would leave him.” To add to the mystery, those tracks have never been publicly released. “I have asked everyone where they are, but never get a straight answer, even from Frank’s daughter Nancy.” 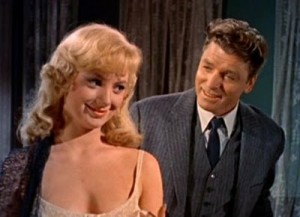 Amazingly, Jones still sings the same R & H repertoire today that she did back then, without any key changes.  While she still has her high notes and vocal flexibility, she has also developed a darker, contralto sound on the low end to complement her once exclusively coloratura soprano. “I actually have two voices now,” she says, “one that I never had before.  What I lost was my mid-range, and I really work at placing those middle notes very carefully,” Jones admits.

Unlike the old days where Jones’ singing was so instinctive that she says she could wake up at three in the morning and belt out a high C without so much as a warm-up, these days she vocalizes every day. “I went back for lessons to a really fine teacher in California about three years ago, but I do already know what to do, the hard part now, at my age, is to do it.”