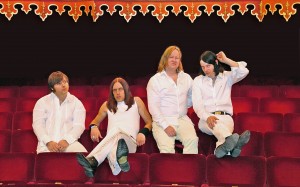 It’s a cold winter night in February, but inside the Double Door is the kind of heat you only find in cold-weather places, where body heat and anticipation fog glasses, and taking them off to give a quick wipe only makes you realize that your vision is still obscured with the air thick with smoke—did we mention it’s pre-smoking-ban 2004? The house is packed for a reunion performance of Chicago’s Urge Overkill, and Jack Black is on stage with the band, hammering a cowbell to “Sister Havana,” in a surreal rock ‘n’ roll moment—after all, Black’s Tenacious D had already whipped the unsuspecting crowd into a frenzy with their secret opening slot.

“The planets aligned, and it was just one of those magical fucking evenings that could only happen in Chicago,” recalls UO’s Nash Kato via phone from Los Angeles, where he’s hiding from the cold.

But as the comedic actor/faux rockstar continued to hammer on that cowbell, with his famous Tenacious D rockface exuding his passion, a funny thing happened. What might have been a mere feel-good nostalgia show suddenly elevated into a performance that seemed to validate Urge Overkill’s place above the littered also-rans of a bygone alternative era which briefly, very briefly shone its light on Chicago like it was the next Seattle. And UO, the band better known for its image of tailored matching suits, martinis, convertibles and excess, suddenly seemed like they were the real deal all along. But then…there’s Black, a fake rockstar whose very presence represents the maddening conundrum of Urge Overkill: if you play the part long enough, do you become the character?

The question is especially relevant, now, as UO gear up to play another hometown gig that’s supposedly going to lead to the recording of a new Urge Overkill album, which would be their first since 1995’s “Exit The Dragon,” an underrated album whose sales failed to meet the Tarantino-inflated demand created by a public who mostly knew the then-trio for their sartorial selections and kitschy cover of schmaltz specialist and sideburn comb-over pioneer Neil Diamond. But before “Pulp Fiction,” and before the matching suits, was the indie band that idolized seminal Chicago imprint Touch and Go’s roster before they found themselves signed to it.

“It took us a while to even accept that we were allowed into this stable of the sickest bands of the time, certainly all of our favorites,” says Kato, singling out the Butthole Surfers, Killdozer, Scratch Acid and Big Black—Steve Albini’s band at the time. Albini produced UO’s 1989 debut album “Jesus Urge Superstar,” but the album didn’t garner much attention. A year later, Butch Vig would produce their next full-length effort, “Americruiser,” but it wasn’t until 1991’s “Supersonic Storybook” that UO, now retooled with Blackie Onassis on drums, seemed to find the winning formula: a cleaned-up sound tuned for pop hooks, and their medallion-clad image of excess that ran in direct contradiction with the angst and disillusionment that had taken over the current rock climate.

Kato says the idea was simply an attempt to “stick out of the bread line” of go-nowhere garage bands. “The fashion shtick alerted people to what we were doing,” he explains,  “but we were always sincere and genuine about making the best music possible, and that never changed.” The band would jump ship to major label DGC for their next album, their breakout and arguable alternative-era masterpiece “Saturation,” which contained hits “Sister Havana” and “Positive Bleeding.”

Loose, colorful and sounding grizzled as ever, Kato knows the right things to say, especially given the benefit of hindsight. “We really love this band, and we love this music. I don’t think being a member of one band should disclude [sic] one from being a fan,” he says quite matter-of-factly. It’s hard not to believe him. And looking back, it’s still really difficult to assess UO’s validity and legacy. Were they an indie novelty act that got lucky? Or were they the genuine deal who fizzled under high-gloss expectations they could never fill? While the debate still seems endless, one thing is for certain: Kato truly believes he’s a rock champion fighting to regain his crown, “a crown we lost somewhere in customs, coming back from our last tour.” That statement alone speaks volumes to his own determination or delusion.

But perhaps whether the Kato crown is imagined or real is irrelevant for one night, at least, when UO hits the hometown stage once more—for at best, it’ll be the comeback of a truly great Chicago band, previously dismissed as poseurs and beneficiaries of a classic case of right place/right time. And at worst? A stirring revival for that brief moment in time when Chicago was the center of the underground music universe…either way, it should be a hell of a show.

[…] The Kato Crown: Urge Overkill returns to Chicago It’s a cold winter night in February, but inside the Double Door is the kind of heat you only find in cold-weather places, where body heat and anticipation fog glasses, and taking them off to give a quick wipe only makes you realize that your vision is still obscured with the air thick with smoke—did we mention it’s pre-smoking-ban 2004? The house is packed for a reunion performance of Chicago’s Urge Overkill… Read More […]