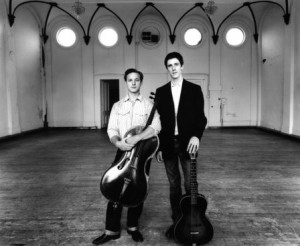 Mountaintop removal is a process that involves the mining of a summit of a mountain through the use of heavy-duty explosives. The debris left over from the explosions is collected and dumped into the neighboring valleys, which has substantial environmental consequences. The method has been highly criticized over the years, and musicians Ben Sollee and Daniel Martin Moore, both from Kentucky (MTR is prevalent in the Appalachians), have teamed up and made a record to bring attention to the controversial practice; “Dear Companion,” out on Sub Pop, is a thrilling chamber-folk album that deftly blends cellist Sollee’s intricate technique and guitarist/vocalist Moore’s singer-songwriter peacefulness. Opening track “Something Somewhere Sometime” is a stunner—two harmonizing male voices and an upbeat approach lead to one of the best songs of this young year. Other inclusions impress as well, like the devastating “Sweet Marie” and the lovely, brief acoustic-guitar instrumental “Wilson Creek.” “Dear Companion” is a breeze and a delight. (Tom Lynch)