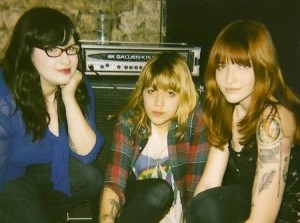 There’s something that’s entirely intoxicating about New York trio Vivian Girls, something that goes far beyond traditional girl-group mystique—the band’s songwriting is especially simplistic, their musicianship primitive, structures and melodies just so high school. But with the debut self-titled record and last fall’s “Everything Goes Wrong,” Vivian Girls have presented their garage-shoegaze sound unapologetically and with ample attitude, creating two records so easily listenable it sometimes makes you uneasy. The disappointing part so far—if there really is one—is that with their second offering, Vivian Girls didn’t try terribly hard to take a big step forward. The production level has risen, as the overall dangerously lo-fi sound of the first record is all but abandoned, but that fuzzy and hissy element gave that record some of its charm. “Everything Goes Wrong” sounds relatively professional, which draws even more attention to the band’s songwriting, which isn’t a good thing. But I’m admittedly being nitpicky, as you can’t really argue too much with a young band who were possibly thrown too soon into the spotlight from deafening blog buzz. Either way, I expect more good things from these girls. (Tom Lynch)