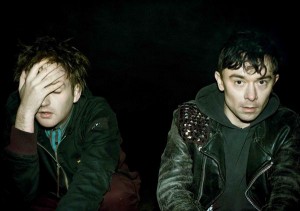 There’s something about London duo The Big Pink that is a little lame. The elementary lyrics, the traditional chord progressions or melodies, the big-room choruses—something here is not quite right for a band with such a pristine electro shoegaze surface sound. The band garnered huge buzz before its debut record was released last September on the strength of some early singles, which was deserved, as the first material introduced to the public was especially convincing. “A Brief History of Love,” The Big Pink’s debut proper, has a lot of attractive pieces that don’t exactly come together. A song like “Velvet” works casually, as it can simply ride its own wave of ethereal beauty. But “Dominos,” another single, is painfully silly, and detracts from the record considerably. Of course, you can’t really blame a band just getting started for not making a perfect record. It’s a fine first attempt, one that shows promise for strong moves in the future. A Place to Bury Strangers plays tonight as well, which makes this bill a full-on shoegaze party, with the band’s intensely loud and hazy distortion sure to deafen those unexpecting. Chicago’s industrial dance crew Gatekeeper opens, which should get this crowd to loosen up a bit. Maybe not even stare at their shoes the whole time. Maybe. (Tom Lynch)