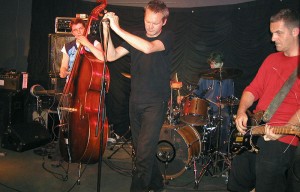 In the years since Netherlands collective The Ex first debuted, in 1979, the band has gone through admirable, always interesting stylistic changes. Venturing beyond the in-your-grill anarchist punk that the group embraced in its infant stages, The Ex have involved jazz elements, African percussion and even Turkish folk. Influential, beloved in a cult-like way, The Ex continually churned out records under leader G.W. Sok’s guidance with striking consistency, considering how many different paths the band explored. Last year, Sok decided to leave the group to pursue other interests, and the band replaced him with Arnold de Boer. The recent release with Boer, a seven-inch titled “Maybe I Was the Pilot/Our Leaky Homes,” shows that even with a new guy at the helm, The Ex remains powerful. Shellac opens, and honestly, the stamp of approval from Albini, Trainer and Weston should be enough to convince anyone. I’m in the middle of a personal Shellac resurgence, listening to each record over and over for three days apiece, and having a helluva time. “1000 Hurts” is king. That record is one mean bastard. (Tom Lynch)