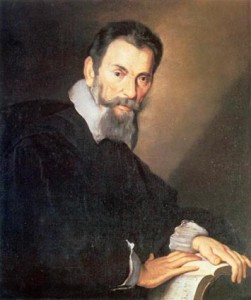 In case you weren’t paying attention, 2010 marks the 400th anniversary of one of the most innovative and glorious works of the Renaissance era, Monteverdi’s “Vespers of the Blessed Virgin,” more commonly known as “Vespers of 1610.”  To celebrate the occasion, the a cappella choral ensemble Bella Voce is joining forces with violinists Rachel Barton Pine and Martin Davids, along with Davids’ period-instrument-ensemble The Callipygian Players, for a rare area performance of the masterpiece that, along with its companion piece, the opera “L’Orfeo,” helped change the course of Western music.

In a press release, Bella Voce music director Andrew Lewis—who will conduct these performances—describes Monteverdi as “a composer of astonishing creativity, [who] forever changed the way we think about music. Renaissance polyphony, based on the Church Modes, made way for functional harmony—an innovation to which even rock ‘n’ roll owes its existence.  Monteverdi’s masterpiece is super-charged with rhythmic and spiritual intensity.”

The particulars of how and why this extraordinary work came into being have been lost to us, but conductor John Eliot Gardiner has theorized that it was a portfolio piece that Monteverdi wrote for St. Mark’s in Venice, where he did end up getting a job and for whose acoustics the piece fits perfectly. Like St. Mark’s itself, a temple more than a church containing Byzantine treasures of conquest that give it a distinctively Eastern feel, Monteverdi wrote a piece that is a musical collage containing many spectacular sections that function as the aural equivalent of a Byzantine mosaic with rich use of gold.  By dedicating the piece to the Blessed Virgin, the patroness of Venice, Gardiner feels that would have clinched the deal.  (Dennis Polkow)