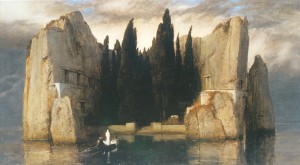 In the wake of hosting the press announcement for the fourteen-month-long multi-venue “The Soviet Experience,” the CSO demonstrates that its involvement is more a marketing ploy than an artistic statement by presenting an already planned all-Russian repertoire program that is more Russian than most of its programs planned for the future festival.

British broadcaster and “Beyond the Score” host Gerard McBurney is a particular Russianaphile, having studied composition in the former Soviet Union, and some of the repertoire chosen for that series reflects that bias, such as this week’s bizarre choice of Rachmaninov’s “Isle of the Dead.”  The schmaltzy, twenty-minute tone poem based on Arnold Böcklin’s famous painting of the same name was a CSO showpiece back in the Fritz Reiner days, but is a derivative work by a composer who constantly looked back to the nineteenth century, despite living most of his days in the twentieth century. Even if the piece is repeated a time or two, this should be one of the shortest “Beyond the Score” yet presented.

Far more innovative and interesting are the works to be heard on the full program (Thursday, Saturday and Tuesday nights) vs. the “Beyond the Score” presentations which only feature the Rachmaninov (Friday and Sunday afternoons), Stravinsky Concerto for Piano and Winds with its longtime champion Peter Serkin as soloist, and the rarely heard Prokofiev Fourth Symphony.  Russian conductor Vladimir Jurowski makes his CSO debut.  (Dennis Polkow)