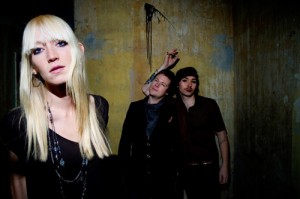 The grittier bits of Norway’s Sereena Maneesh keep the act from being just another shoegaze revivalist band, though the group offers a good share of pop as well. The second record, released last week on 4AD, called “S-M 2: Abyss in B Minor,” sports an overly melodramatic title for a record that’s more than a mope-fest. Sereena Maneesh often rides a wave of dark, epic sprawl that’ll exhaust even the most patient My Bloody Valentine fans, but the moments of pure beauty and fuzzed-out heavenliness make up for any indulgences. The seven-minute-and-twenty-second-long “Don’t Come Down Here,” from the band’s self-titled debut, stands as the top choice of the short catalogue. That record on a whole is superior, but there’s nothing on “Abyss in B-Minor” that’s disagreeable. Even the absurdly atmospheric groove of “Ayisha Abyss,” a notable new track, seems like a natural progression. The synth-heavy meanness of “I Just Want to See Your Face,” assisted by its brevity (only three minutes!), impresses as well. The group may not be setting the world ablaze, but Sereena Maneesh is a solid band making solid records. (Tom Lynch)