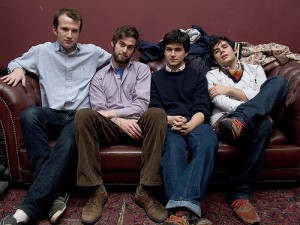 So after all the initial buzz and overblown praise and then the backlash and biting criticism and “Oh god they are so overrated I don’t get it!”s, Vampire Weekend’s second record, “Contra,” debuted number-one on the Billboard 200. A notable feat, it’s only the twelfth independently released record (XL Recordings) to do so. “Contra” works much in the same way the band’s self-titled debut does—charming melodies and sugar-high tempos keep the affair upbeat and (gasp!) fun. Tracks like “Horchata” and “Cousins” deserve to have come from the same band that doesn’t give a fuck about the oxford comma. Speaking of that song, though, “Contra” lacks the memorable individual moments of the first record—there are no chills-inducing spots like the hook to “I Stand Corrected” or the introduction of the cello in “The Kids Don’t Stand a Chance,” or the “Graceland”-like breakout down in the middle of “Cape Cod Kwassa Kwassa.” But that’s just bickering. “Contra” working more as a complete piece than a mish-mash of songs is hardly a dealbreaking criticism. Yes, the band still comes off as New York City trust-funders, and Ezra Koenig’s lyrics remain elevated and mostly ridiculous; both of these perpetual elements of Vampire Weekend keep many indie-rock old-schoolers wary, and I can understand that. But at the same time I want to tell everyone to get over it and shake those hips. (Tom Lynch)