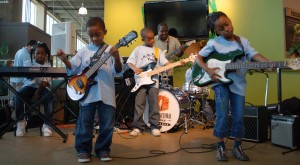 The bands playing Chicago’s first-ever “The Stars of Tomorrow Summer Spectacular!” may not know much about Alice Cooper, but they’ll definitely celebrate like rock stars when school’s out for summer this year. Between Lollapalooza, Pitchfork Festival and the Hideout Block Party, not to mention countless city-produced festivals on the lakefront, Chicago has no shortage of summer music in the open air. But the Intonation Music Workshop (IMW) has managed to find a fairly new twist with its all-day festival taking place June 12 at Fosco Park Playground, 1312 South Racine: all the bands are made up of kids between the ages of 5 and 18 years old, including Trace, Fatal Attraction and Soul Children.

Mike Simons, founder and executive director of IMW, a program that provides Chicago’s low-income children with access to musical instruments, instruction and performance opportunities they otherwise would not have, says he began with the hope of providing the city’s underprivileged children with a chance to learn essential life skills like teamwork and risk-taking, and express themselves creatively through music. Established in the spring of 2006, IMW now serves 450 students a year and operates eight sites across the city.

Although Simons says IMW is “not so concerned about making great musicians,” they’ve certainly cultivated some promising players. In four years, students of IMW have formed more than twenty rock bands, including graduates who’ve played at Lollapalooza and have been invited to private auditions for “America’s Got Talent.” PopTots, a group of 5- to 7-year-olds, are slated to perform at Martyrs’ April 25. Cherry Coke sales should go through the roof that night. (Darrel Sangster)