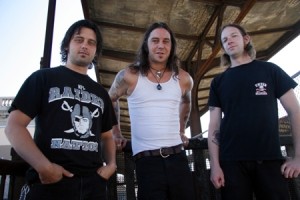 Oakland’s backbreaker veteran metal act High on Fire, led by vocalist and virtuoso guitarist Matt Pike, has been one of the most exciting American metal acts since its inception in 1998. The band took the roots of stoner metal and sped it up to a blistering pace—Pike’s assault, both with voice and often unbelievable speed on the fret board, crushes you into submission. New record “Snakes for the Devine” continues High on Fire’s path of destruction; incessant, powerpush drumming, wicked riff-heavy guitar upheaval and, of course, Pike’s throat-destroying vocal growl build up to a beautiful, chaotic symphony. When metal is done right—as it has been by this trio time and time again—the fundamental thrill of hearing driving musical madness comes to the surface and there’s little else in the world as enjoyable. “Snakes for the Divine” may be imperfect if you pick it apart piece by bleeding piece, but if taken fully at the right moment, it does, indeed, feel perfect. Divine, even. (Tom Lynch)