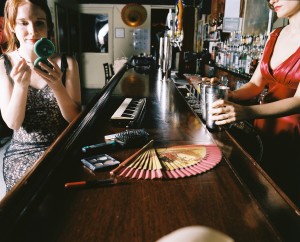 Upon hearing the name of this Brooklyn-based band, you half expect to see a group of ranchera-belting Latinas with bleached hair, sombreros and maracas. Instead, you get are is a group led by two classically trained gringas backed by a group that includes musicians from France, the U.S. and Colombia paying tribute to Latin American music while taking on Mozart as they go along.

The group got its start about five years ago when Emily Hurst and Alyssa Lamb got together to start a classical vocal duo. Unable to find suitable duets, they began playing around with the music of 1930s Mexican singer Lydia Mendoza. “We had so much fun that we wanted to do more, and just took it from there,” Hurst explains via an email interview.

On their third disc “Ziguala” (Barbes), Las Rubias sought to expand their sound by adding strings and also an electric organ, a direct influence from Chicha Libre, the band led by quatro player (and Las Rubias’ producer) Olivier Conan. Apart from that, the album follows the group’s tradition of combining classical elements into a Latin point of view—this time including a very personal version of Bizet’s “Sequedille.” (Ernest Barteldes)