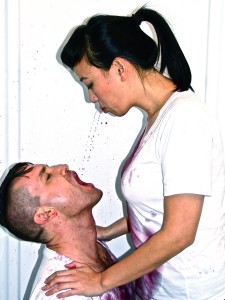 OK, so Xiu Xiu’s new album is called “Dear God, I Hate Myself.” While this would’ve been a believable title for a 1990s emo act, or maybe Weezer, or more appropriately The Magnetic Fields, now it’s a little cringe-worthy, even coming from Jamie Stewart, who above all else surely hates himself. I don’t doubt that. I only question the final decision-making process that led Stewart to decide on this title, a title that not even Morrissey dared employ. (I’m sure countless bands over the years, when discussing potential titles for new records, tossed the tag around self-mockingly and with great laughter.) There is a title track, a traditional—if you could use the word traditional when discussing Xiu Xiu—Stewart track that’s only a little catchy and features jarring structural shifts that render it practically unlistenable. There have been moments in the past in which Stewart’s talent has risen above all of this experimental bullshit and he’s produced a song that actually makes him seem human—unfortuantely, on “Dear God, I Hate Myself,” he smothers under the weight of his own self-obsession. Next! (Tom Lynch)