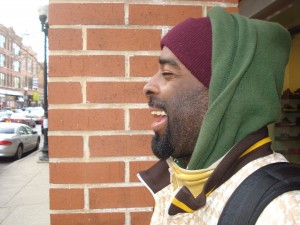 “There’s nine million people in Chicago,” says Sharkula. “A thousand new people here everyday. I got to sell CDs.” Chicago’s population is closer to three million, but it doesn’t really matter. The feeling, the sense of urgency, is the same. “Even if I’m taking a lunch break, I’ll be like ‘Hey, you like hip-hop?’” says Sharkula.

People whisk up and down Milwaukee Avenue cursing the lingering cold weather. Outside of a shoe store Sharkula stands, bag of CDs in one hand, wearing his usual hoodie-and-wool-cap uniform, and a comforting yet sly smile. A mom and her two sons walk by. “Hey, you like hip-hop?” She shoulders her sons past, letting a “no thank you” escape. A young man in a suit walks by, two college girls. All give the same response as the mom. Sharkula looks into the shoe store, waves at the familiar faces of the employees and walks up the street to another spot. “I love to go on tour,” he says. “I have been on tour since ’98. The tour of Chicago.”

What started out as a way to get candy and novelties from classmates as a kid—trading mix tapes—has now become a way of life.

“Hey Shark,” a guy yells out his commercial van.

“I got some new shit,” he replies, smiling.

“I’m broke today, but I’ll get you next time.” The van rides off with Sharkula nodding and waving, wishing the guy a good day.

Over the course of the afternoon, that seems to be a typical conversation. And though it means he doesn’t make a transaction, he’s connecting with the people and that’s sometimes enough. “I want to flood the city with something!” Sharkula says excitedly. “Make them laugh, forget about the recession.” Even when he dreams about running his own label, he’s not picturing the cars, it’s the label mates and housing on the forefront of his mind. “A lot of labels sign guys but they don’t think about where they live,” he says. “I’d take some of that money into real estate. Not just for myself, but for the artists.” 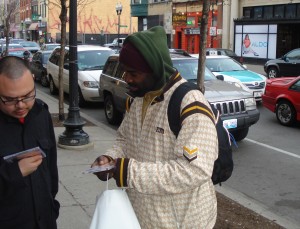 A local DJ walks by and stops to talk shop with Sharkula. They fill each other in on what’s going on around the city, gossip on new releases and recent shows. They joke about MF Doom’s show at the Congress last month, which was the source of a raging controversy in its aftermath due to the artist’s extremely late appearance, and questions as to whether the masked man was actually the artist at all. “Give me that show,” Sharkula jokes. “I’ll show up two hours early. I’ll do two soundchecks.”

A few more people pass by, mostly responding with curt “no thank you’s” or nothing at all. The afternoon sun is struggling to hang on in the cold when Sharkula runs his line “Hey, you like hip-hop?” on a guy in his mid-twenties. He is skittish at first but concedes. Sharkula talks to him about the CD, points to the best tracks. He’s selling these CDs for ten dollars, but assures the guy that he’ll take whatever he can get. Sharkula is all smiles, and when he shakes the young man’s hand thanking him and wishing him well, it’s genuine. A connection. (Peter Cavanaugh)