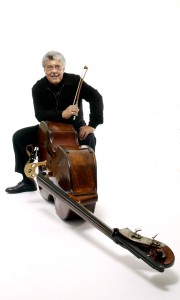 A consummate jazz bassist and music educator with various credits both as a leader and a sideman with luminaries like the late saxophonist Dexter Gordon and drummer Jack DeJohnette, Rufus Reid seems find no barriers within the jazz format, and is comfortable with straight-ahead jazz, Latin and even Brazilian music. That is evidenced on “Out Front” (Motema), his latest disc as a frontman.

The disc opens with the highly complex “Glory,” which is followed by the Latin-esque “Dona Maria,” which allows Brazilian-born drummer Duduka da Fonseca to exercise his influences. The CD’s highlights also include the brilliant “Dry Land,” a syncopated tune reminiscent of Egberto Gismonti and “Cryin’ Blues,” a swinging melody around a simple blues beat. At his release concert in Chicago, Reid will be backed by Fonseca and Steve Allee (piano), who also performed on the album. (Ernest Barteldes)