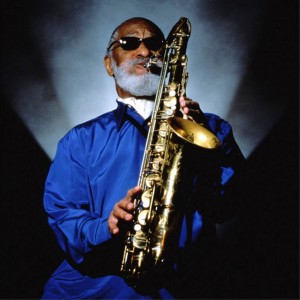 Sonny Rollins, one of the last truly monumental figures of jazz, is still kicking and still performing, still attempting to ascertain the randomness of the fact that, despite immense challenges throughout his life, he is still blowing away, both literally and metaphorically.  It is not just that Rollins has outlived all of his iconic contemporaries but that he has reinvented himself several times during his long career. Rollins began as a pianist, switching to alto before finally taking up the tenor saxophone. Like Charlie Parker, Rollins was convinced that heroin was the key to innovative playing, and it wasn’t until he went to jail for armed robbery to fuel his habit and entered into rehabilitation post-prison at a time when such a concept was completely experimental, that he took his chances and got off the stuff, whatever would happen to him musically. Like Parker and so many others, that could have been the end of him, but Rollins emerged and a new style of playing was the result: it kept the cutting-edge post-bop sensibility of his early career, but with a poignancy and tenderness that was rare among the beboppers. His explorations into the timbres of the instrument saw Rollins craving such harmonic freedom that he formed sax/bass/drums trio settings without piano and yet could also appear with Big Bands and play as melodically as anyone in the history of the instrument. Eastern philosophy became a stalwart for Rollins, and Latin rhythms, electronic instruments and anything that could expand his musical horizons was something that Rollins was willing to give a try. Like Vladimir Horowitz, Rollins has regularly taken long sabbaticals from recording and performing, and any time he performs is an event.  Rollins will celebrate his eightieth birthday this year, and though he rarely looks back, this appearance is being billed as a birthday tribute concert: Chicago is the second stop of a tour that is heading across the country and across Europe all year. There is no new recording—unless you count the constant re-issues and re-releases: the last new recording was five years ago—but the line-up includes guitarist Bobby Broom, bassist Bob Cranshaw (a frequent Rollins collaborator since 1959), drummer Kobie Watkins and percussionist Victor See-Yuen.  (Dennis Polkow)