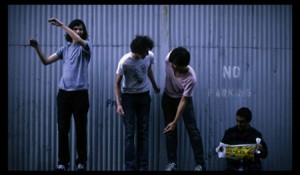 San Francisco’s The Morning Benders recently released their second full-length record, called “Big Echo,” a swift West Coast collection of chamber-pop with sunshine melodies and beach-bum serenity. Throughout their previous releases—the debut and a bunch of EPs—the band has continually maintained a sweet Sunday-morning sound, relaxed and assured, Shins-like in execution but not at all coy. In fact, one could make the argument that The Morning Benders have more in common with The Beatles than any other pop band; the group’s embracing of that specific pop sound keeps it separated from other West Coast peers. (Grizzly Bear’s Chris Taylor produced “Big Echo,” and you could immediately tell his impact.) With these types of records it’s difficult for a band to avoid growing tiresome, and The Morning Benders aren’t immune to this—the consistently midtempo tracks blend together after a while and you struggle to keep your mind turned on. Strangely, the melodic haze works, however, and “Big Echo” breathes alive like a breeze felt on an afternoon on the sand. (Tom Lynch)