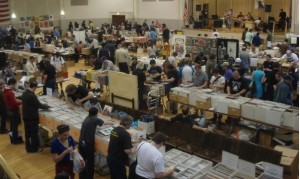 A horde of collectors and novices alike are set to come down on the West Loop this weekend channeling “High Fidelity’s” Rob Gordon. CHIRP (Chicago Independent Radio Project), which has recently launched its community-run online radio service, is putting on its eighth annual “Record Fair and Other Delights” at the Chicago Journeyman Plumbers Union. “I love Pulaski Park, but the fair needed to get bigger,” says founder Mary Nisi, speaking about the fair’s former location. And with at least eighty vendor tables and an expected weekend attendance of a thousand people, the fair has expanded. This will be the fair’s second year at the Plumbers Union. Aside from records, for which Nisi says there will be “everything from really high-end dealers to dollar records,” reps from local labels and bigger ones such as Matador are attending. “Irazu is doing the food, and Goose Island will be selling beer all weekend long,” says Nisi. “People kind of get drunk and wander around and look through records.” And if that’s not enough to sway you, DJ sets from Disappears, Mannequin Men, Alla and Deia Does Dylan along with live performances by Pretty Good Dance Moves, Maurice, and the Loneliest Monk keep the crowd moving. Tickets are $7 and Chirp offers a Saturday early-bird special: for $25 dollars you get first crack at the records before the doors officially open. (Peter Cavanaugh)