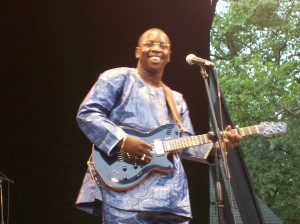 The son of the late, great Ali Farka Touré definitely does not live under his father’s shadow. After his impressive self-titled debut two years ago, he emerges with “Fondo” (Six Degrees), a disc that explores and expands Malian blues under a more global perspective.

Since his first disc came out, Touré has been on a whirlwind of activity—in 2008 year, he went on extensive US tours and also appeared alongside Pee Wee Ellis, Fred Wesley and Senegalese multi-instrumentalist Cheik Lô on “Say It Loud: I’m Black And I’m Proud,” a tribute to James Brown that included a concert at New York’s Lincoln Center and he also participated on the “In The Name Of Love: Africa Celebrates U2” compilation with a very personal cover of “Bullet The Blue Sky.”

On his new CD, Touré seems to have picked up a lot of influences from music he has heard along the road: “Diaraby Magni” pays homage to the roots reggae of Bob Marley and Peter Tosh, while the “Chérie Lé” has a clear Brooklyn vibe thanks to Tim Keiper’s rock-inflected drumming.

Not that Touré has drifted from his native African roots—one of the most beautiful moments on the disc is the slow-tempo “Paradise,” which features Toumani Diabaté on the Kora, a 21-string harp-like instrument commonly used by West African musicians. Another highlight is “Slow Jam,” an improvised blues piece where Touré showcases his strong improvisational skills. (Ernest Barteldes)