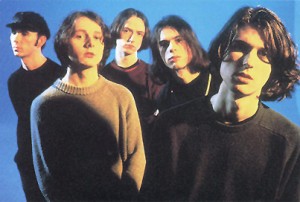 Chapterhouse never really got a fair shake. The Reading band, which formed and found its style amongst other early-nineties shoegaze acts like Slowdive, Ride and Moose, essentially stopped making music in 1993 as its members went their separate ways and the genre lost its battle with the skyrocketing popularity of grunge and hard rock. (Chapterhouse famously followed Nirvana’s set at the 1991 Reading Festival.) After My Bloody Valentine’s “Loveless” and one or two of Slowdive’s records, Chapterhouse’s debut full-length, “Whirlpool,” long out-of-print until re-released a few years ago, stands as one of the great complete shoegaze records, doused in reverb (of course), vocals buried, guitars chiming and bracing. “Breather,” one of Chapterhouse’s most famous songs, stands the test of time as both a fantastic pop number and proof that a shoegaze song can make you move. The band reunited for a gig in November of last year with Ulrich Schnauss, and apparently decided to give it another go, as it added short tours for 2010. Fans of the genre and that early-nineties Reading scene shouldn’t miss this—maybe this will bring “Whirlpool” to the masses, where it should’ve gone all those years ago. Bonus: Schnauss plays as well. (Tom Lynch)