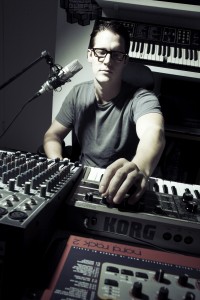 Warm, ear-tickling vinyl pops give way to ghetto and brimstone pulpit samples, then beautifully hypnotic Marimba harmonics just this side of Kaneda cruising Neo Tokyo in “Akira.” This is the sound of “Walk Tall,” the deceptively bumping leadoff track from Glimpse’s forthcoming album “Runner” (Crosstown Rebels). Already turning heads is the second track and advanced single “If I Was Your Girl,” a catchy, summery breath of soul-infused feelgood house which, along with “Walk Tall,” seems to set the mood for “Runner,” a solid exercise in house/techno/jazz/soul fusion. But before you write off Glimpse’s latest effort as just another attempt of a cold techno producer looking through Moby’s steaming compost pile for unused samples of yesteryear earsugar, understand that man-behind-the-moniker Chris Spero has always showcased his artistic progressions. His twelve-inch “Black” releases (2004-07) started with the skullfucking techno of “Dig This” (from “20% Black”), and morphed into minimal wonkiness (the “40% Black” and “60% Black” releases), and perhaps precursors of his more current soulful side surfacing in “Stealing Nina” (“80% Black”), and even beach-sunrise set material in “It The Living Things” (“100% Black”). Last year would find Glimpse’s ever-evolving sounds finding homes on DJ-owned labels like Get Physical’s weird little brother Kindisch, Luciano’s Cadenza, Carl Craig’s Planet E and Ben Watt’s Buzzin’ Fly. With “Runner” set to release on May 24, globetrotting Glimpse has been racking up his miles, touring his live show incessantly since February. And besides making the rounds at last month’s Winter Music Conference in Miami, tonight’s appearance in Chicago is Glimpse’s only scheduled US appearance in sight. And speaking of Chicago, Glimpse proves pretty damn able at paying homage, with the Mr. Fingers-riffic deep churn of “Thank You” (also from “Runner”). But I digress. Joining him tonight are a pair of Motor City’s finest DJs in the edutainingly skilled Patrick Russell, and moody maestro Aran Daniels. (Duke Shin)