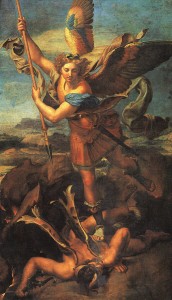 If it seems bizarre that an organization called Music of the Baroque would label its season-finale program “Gloriously Baroque,” it is an indication of just how far the repertoire of the organization has strayed from its original mission. No matter, enjoy a basically Bach program with a couple of Telemann works while you can.

The theme here is St. Michael slaying the dragon and no less than three Bach cantatas celebrating that feast day will be included: BWV 50, 130 and 19 along with Bach’s First Brandenburg Concerto which conductor Nicholas Kraemer thinks has been played too prettily and properly in the past; Kraemer feels that the horns were intended as hunting horns being introduced as a raucous diversion and plans on including them as such. No word as to whether these will be the natural horns that Bach would have used, which would really add to that effect.

The rarely heard Telemann cantata “Nun ist das Heil und die Kraft” also takes up the Michael vs. the dragon theme, which will be heard along with a Telemann Suite in d minor for three oboes, bassoon and strings.  (Dennis Polkow)