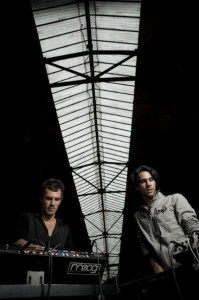 It’s been a strong start to 2010 for debuts and notable acts dropping into Smart Bar, and tonight is no exception with the Chicago debut of Belgian duo Spirit Catcher. Comprised of engineering savant Jean Vanesse and keyboard player Thomas Sohet, Spirit Catcher has been a prolific producer of the highly refined sort. No crushing walls of bass or agit-synth assaulting eardrums but, rather, pant-shaking, boogie-influenced deep house jams, with a touch of early Detroit and sprinkled with a light, white dusting of pure, uncut disco. Their ability to repeatedly use that formula to find the feelgood sweet spot has kept Spirit Catcher in high demand for remixes, too, putting the groove in Phonique, smoothing out Ken Ishii, housing-up the breaky soulfulness of Max Sedgley, and on and on. But distinctive sound aside, it’s not as if Spirit Catcher isn’t capable of surprises, too, like the out-of-left-field touch of an acidic 303 on “Can’t Let Go” (the B-side from December’s “Secret Stranger” release) or the unexpected peak-time electro-house energy from 2008’s “High Control.” But don’t just take our word for it. Spirit Catcher’s Chicago debut is a live performance, providing you the chance to hear their music for yourself…unless you’re just not in the mood to add an arpeggiated smile to your melodic synth-loving face, and just need to stay home. Also on the bill are Smart Bar’s resident DJ trio Orchard Lounge, who definitely count Spirit Catcher as one of their primary influences, but add a techy touch of their own, weaving melodies and shifting directions whenever they switch up selectors. (Duke Shin)