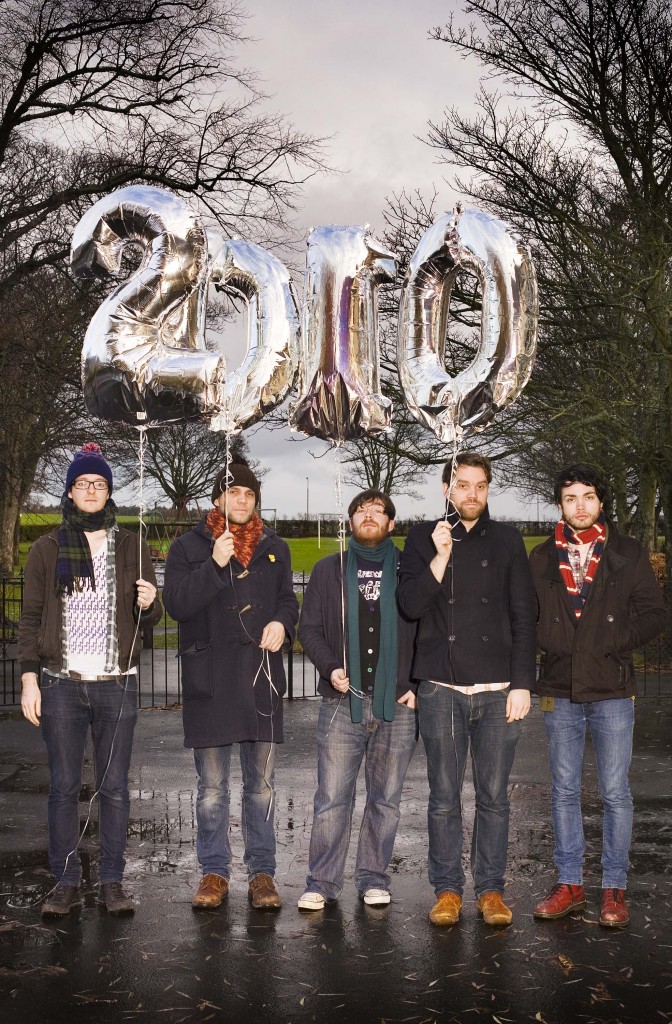 I won’t forget it anytime soon—some late night at Rainbo Club in Ukrainian Village, a few years back, and a friend of mine stumbles in. His eyes were glossed from hours of excitement. “I just saw the greatest band of the last twenty years at Empty Bottle,” he said, out of breath. “They’re called Frightened Rabbit.”

The Scotland band’s breakout record, 2008’s “The Midnight Organ Fight,” was, on its surface, leader Scott Hutchison’s ultimate break-up record. Deeper, it was a bible of regret, foolishness, anger and, eventually, acceptance. Raw and beautiful, the tone was indie-rock but the sound belonged in a coliseum. Heartache and booze have gone together so well for centuries.

Two years later the band’s achieved an audience, and on its follow-up record, “The Winter of Mixed Drinks,” Hutchison’s seemed to move on. Given his despair on the last album, you can’t help but feel happy for him. The band goes large with booming anthems—big builds that explode into big choruses—and the sound’s a perfect match, even if lyrically Hutchison seems to keep some of it to himself this time around. Long story short, he’s over it, “not miserable now,” as he promises on one of the record’s best songs. “The Winter of Mixed Drinks” is a solid step for Frightened Rabbit and its once-heartbroken prince.

I caught up with Hutchison just before the band reached Chicago for its date at Metro.

Did you feel any added pressure after the success of “The Midnight Organ Fight”?

There was a certain amount of that in my head—though, no one puts as much pressure on me as I do myself. I do think pressure is a very positive thing, and can help to push you into new areas and make better work. It was certainly a very different situation than last time, when nobody really knew of the band. I always try to use pressure to better myself and the band.

How do you feel this record compares to earlier Frightened Rabbit work?

It’s more produced—it’s definitely a “studio album.” I also made a decision to become slightly more oblique lyrically. Listening back to, and playing songs from “Organ Fight,” I started to find the content a little cloying and clumsy. I think it’s a classier album than the last one.

The new record feels more epic. Was it a conscious decision to go for that?

I think I’ve always been trying to write and record songs that have that feel—the big chorus, the build and build and build some more. I think the difference is that we actually achieved that this time around, due to the fact that we were given the time and space to do so. It’s actually a hopelessly unconscious decision for me to make that kind of music, as it is that big sound that satisfies me at present. That said, I don’t ever want to make a record like that again.

Lyrically, it seems like you’re giving an update on your mental and emotional health, and compared to the last record, you’re in a better place now. Do you feel more comfortable writing while generally “happier”? Less comfortable?

It was a challenge—I’ve rarely written about the lighter side on past records. However, even though I am admittedly happier now, my mind still leans towards the darker aspects of life. I think the positivity present on this record has been overplayed in the press. It’s really more about acknowledging the past and it almost represents a forty-five-minute-long “Phew, glad I’m out of there.”

I think I am perhaps less revealing in my writing—there’s a lot more room for the listener to walk around in these new songs, more open-ended themes and situations. “Organ Fight” helped me to achieve a lot of the things I had always hoped the band would and as a result I’m happier and more content with life. I’ve learned how to be a more open and sociable person from day to day, and I now enjoy meeting and talking with new people. That was always something I was really bad at.