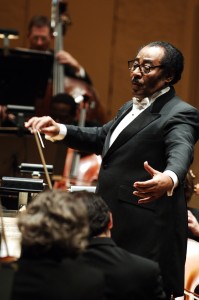 “The news here is that no music director has been appointed yet,” says Chicago Sinfonietta founder and music director Paul Freeman, anticipating curiosity about whether or not there is an end in sight to an ongoing and speculative process. “In other words,” he laughs, “I’m still here.”

Freeman, 74, announced his retirement in March of 2009, in part so that he could remain actively involved with the orchestra that he founded and has so carefully nurtured and tendered for more than two decades during the process of locating his successor.

“I realize that there is a time to be born—and I don’t want to say the other—but after nearly twenty-five years, everybody needs a new breath. I won’t say a breath of fresh air, but a new breath,” says Freeman. “This is one of the elements that helped this orchestra develop as an artistic institution, that we’ve kept everything fresh and new. I am not saying that I feel that the relationship between the orchestra and myself has ended, I don’t feel that way: I still like the involvement. But there comes a time when you have to think of securing the future.”

Part of the issue in retiring, Freeman admits, is health-related in that spinal stenosis makes the physical demands of conducting far more of a challenge. “I wouldn’t put it totally on health,” says Freeman, “which of course, is a personal thing. It is kind of coincidental that I have had the spinal stenosis and two [back] surgeries in the last eight years, and let’s leave it at that. But I am doing as well as can be expected and I feel fine. I need to stay on my medication, that’s important.”

Maintaining an active relationship with the Sinfonietta during this transitional period has kept Freeman part of the process. He has typically conducted at least one piece on the concert of each guest conductor, who have each been “very respectful and made me feel that they wanted me to participate in their program. It keeps me involved.”

The Sinfonietta’s concerts are so spread out throughout the year that a single season was never going to be enough to allow for a precise timetable to locate Freeman’s successor. “Too much attention is being paid to deadlines,” says Freeman. “It will take us a full season and then part of another to hear everyone that we want to hear. We still have three or four guest conductors due in yet and we would like to give several young conductors the opportunity and see how they work out, both for them and for the orchestra. From that experience with the musicians, the search committee and our audiences, we will come up with an answer.” Freeman predicts that “within the next few months—I don’t know how many—within the year, certainly, someone should be known.”

Does Freeman already have a potential candidate in mind, whether or not he would say so at this point?

“It is much better not to speculate,” says Freeman, “because speculation in this case doesn’t necessarily hold true. In any case, we’re having a good time watching others conduct. And I am pleased with the choice of guest conductors thus far. We have had some very talented musicians and I am pleased to see the development in the art of conducting. Some of these young conductors have performed beyond their years and are more mature than one would have thought. Things can look one way on paper, and then it happens, and it even exceeds your expectations.”

The biggest change that Freeman sees over the nearly twenty-five years since he founded the Sinfonietta is that even the “middle-sized jobs, music directorships of middle-sized orchestras are now big jobs. We have never had so many top-quality mid-sized orchestras. We have such fine musicians coming out of such fine conservatories.

And yet one thing that Freeman says has not changed is that personnel in symphony orchestras throughout the country still have very small numbers of minorities performing in orchestras. “In terms of African-Americans,” says Freeman, “not just people of color, because Asians certainly have the up on that—you will see at most, three in any symphony orchestra unless the orchestra has a special training program for minority musicians. We can’t count our [African-Americans] anymore: they make up about a third of our orchestra.” Indeed, the Chicago Sinfonietta was recently nationally recognized as the most diverse orchestra in the country.

Freeman will conduct the all-Mozart half of the Sinfonietta’s season finale concert which will include the Overture to “The Impresario” and the first movement of the Sinfonia Concertante, K. 364, with Grammy Award-winning conductor John McLaughlin Williams taking the podium for the second half, which includes George Frederick McKay’s “Variants on a Texas Tune,” Michael Abels’ “Delights and Dances” and Kodály’s “Dances of Galánta.”

“We wanted to feature each of the artists in more than one capacity in this concert,” Freeman notes, “so with the Harlem Quartet as our guest artists, the Sinfonia Concertante gave us the opportunity to use the violin and viola as solo instruments. Then we were going to do the Brahms Double Concerto which committed the violin and the cello, and then we put them all together and then with the orchestra for the Abels and conclude with Kodály’s ‘Galánta Dances.’ But then, the cellist from the Quartet broke his finger, and the rest is history,” he laughs, “so we had to make some changes.”