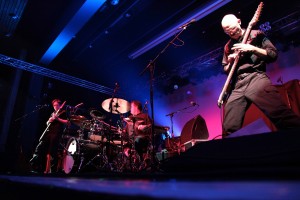 A Chapman Stick is no ordinary guitar: the fretboard is much wider and the neck much longer, allowing for up to twelve separately pitched strings which are then tapped or fretted in combinations that, together with its ability to be manipulated like a synthesizer, allow for an immense variety of timbres and textures. If one Chapman Stick is good, then two are even better, is the view taken by the new group Stick Men.

The latest project by King Crimson rhythm section Tony Levin and Pat Mastelotto, the unique sound of Stick Men is the novel use of two Chapman Sticks—one played by Levin, and the other by Michael Bernier—to create a startling array of sounds that are metallic and raw on the one hand, yet virtuosic and progressive on the other.

Levin has been using the Chapman Stick virtually since it was invented back in the mid-1970s, and has used it to dazzling effect not only in King Crimson, but also on tour with Peter Gabriel. Fellow Chapman Stick virtuoso Michael Bernier is a virtual newcomer by comparison but has the advantage of having grown up with the unlimited possibilities of the instrument.

What do these guys do with these instruments? On their debut album “Soup,” which will form the core of the repertoire of the current tour, Stick Men provide polyphony not possible on standard guitars and provide at times a bewildering and deceiving variety of roles and sounds that are the equivalent of a two-man orchestra. At times, the band sounds like a funhouse heavy metal band, at other times, more like a lost orchestra under water, particularly on the group’s arrangement of Stravinsky’s “Firebird” Suite. In any case, with this repertoire and musicianship, some Crimson classics and extended improvised sections, this will not be your average club gig, that’s for sure. The E-Mics Acoustic open.  (Dennis Polkow)