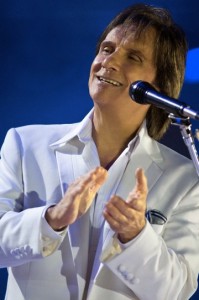 In the years that British Invasion bands dominated the music scene around the world, a group of young Brazilian musicians with a keen eye on the possibilities of rock music began spreading the seeds of what would become the Jovem Guarda (“Young Guard,” as opposed to old guard), a movement that conquered the country’s teens.

Like their British counterparts, those performers wrote their own songs (unlike Brazil’s early rockers, who simply recorded Portuguese versions of American hits), and with a little help from the media, they quickly became Brazil’s first bona-fide rock stars.

At the helm of this group was Roberto Carlos, who was introduced as “Brazil’s Elvis” during live radio broadcasts, and would soon be dubbed “the king” of Brazilian music.

A proof of his appeal at the time is the fact that his 1965 single “Quero Que Va Tudo Para o Inferno” (“I Want Everything To Go To Hell”) topped The Beatles’ “Yesterday” in sales that year in Brazil.

As the music scene changed, so did Carlos. The mid-seventies saw him shift his style to cater to a wider adult audience. That move made his popularity grow with the help of the country’s Globo TV network, which has broadcast a yearly holiday special—a Brazilian tradition only broken in 1998 on the wake of his second wife’s fatal illness—that features his greatest hits and various guests.

Always keen on finding new markets, he began recording in Spanish and French (a sole English-language disc in 1982 was not well received) while continuing to make records in his native Portuguese, which have always been released in time for the year-end holidays.

Carlos’ early music was rediscovered by the country’s younger generation (who only knew him for his sentimental, romantic material) after new bands like Nação Zumbi and Barão Vermelho collaborated on “Rei,” a 1995 tribute disc with new recordings of his sixties and seventies hits, which prompted him to finally revisit those songs (some of which he hadn’t performed live in years) on a 2001 “MTV Unplugged” concert.

At 70 years of of age, Carlos continues to record and perform regularly, and his current tour celebrates fifty years in the business. In addition to romantic tunes, his rebirth in the Christian faith has inspired him to write and record religious tunes, which have also made their way into his setlists. (Ernest Barteldes)