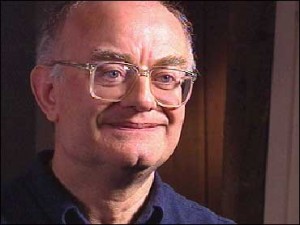 Celebrated British choral composer and director John Rutter makes a rare area appearance this weekend as the guest conductor for the St. Charles Singers, an extraordinary thirty-member-plus professional chamber choir based in the far western suburb.

Rutter is the founder of the internationally known and revered Cambridge Singers, which has performed and recorded countless Rutter works and arrangements that have become repertoire staples of choirs throughout the world, including top professional groups in Chicago such as Bella Voce and Chicago a cappella. Rutter is also renowned as a sensitive interpreter and stalwart standard bearer of the English choral tradition.

Becoming a fan of the St. Charles Singers after accepting founder and artistic director Jeffrey Hunt’s invitation to conduct the choir back in the early 1990s, Rutter would go on to make no less than four return engagements throughout the decade to conduct the group, the last time in 1999, all at the group’s flagship venue, Baker Memorial United Methodist Church in St. Charles.

Realizing the wide interest that such an appearance would create more than a decade later, the group is mercifully transporting its concerts further east: all the way in to Wheaton for the inaugural concert, and downtown for the second.

Two Ralph Vaughan Williams’ works will be spotlighted, the a cappella “Three Shakespeare Songs” and “Serenade to Music,” which will feature guest soloists soprano Michelle Areyzaga, alto Tracy Watson, Chicago a cappella tenor Trevor Mitchell and bass Douglas Anderson along with strings and harp instead of piano, which Rutter feels allows for a more transparent texture in this work.

Also included on the program are Charles Stanford’s “Quick! We Have But a Second,” and Benjamin Britten’s “Five Flower Songs,” Op. 47, as well as works of Rutter himself, including a set of Rutter’s English folk song arrangements—including some with string and wind accompaniment—as well as Rutter’s “The Lord Bless You and Keep You,” the Christmas carol “What Sweeter Music” and his “Suite for Strings,” a string orchestra setting of four folk tunes: “A Roving,” “I Have a Bonnet Trimmed with Blue,” “O Waly, Waly,” and “Dashing Away.”  (Dennis Polkow)