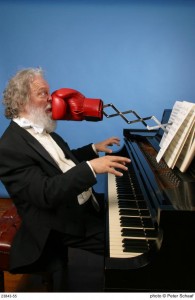 P.D.Q. Bach is the brainchild of “Professor” Peter Schickele, who has made a forty-five-year plus comedy career out of “discovering lost” works of this supposedly twenty-first and illegitimate son of Johann Sebastian Bach. Being the funniest and most popular music satirist since Spike Jones and Victor Borge has been both a curse and a blessing for Schickele, a contemporary composer and broadcaster in his own right, whose own notoriety has been so eclipsed by his comic genius that it has been nine long years since you could see Schickele perform in Chicago as the good Professor that introduces lost works by the faux composer.

What remains remarkable about Schickele is that when he performs as an ambassador for P.D.Q. Bach, he can be appreciated on every level: as a physical and slapstick comedian, even a young child will find him funny. And yet, the most sophisticated classical music lover will find immense cerebral humor by his cross-fertilizations of high art with unexpected lowbrow and bawdy tastelessness along with his lampooning of everything held sacred in a world that takes itself far too seriously.  And yet through the whole thing, Schickele plays it all so credibly, so straight, that there is always the possibility of someone taking it all in as is.

This outing, dubbed “Musical Mayhem,” includes conductor Edwin Outwater and members of the Chicago Symphony Orchestra along for the ride—that is, if they can manage to keep a straight face—and spotlights some of the more notorious perpetrations from P.D.Q.’s so-called “Soused (or Brown-Bag)” Period.

Schickele’s own team of “co-conspirators ” who, as he, always play things completely straight, include “stage manager” William Walters and “off-coloratura” soprano Michèle Eaton, will participate in excerpts from P.D.Q.’s “mercifully incomplete” opera “The Civilian Barber,” a send-up of Rossini’s “The Barber of Seville” with its inimitable Polizeiposaune (“police trombone”) solos, and the infamous “Perückenstück” (“hairpiece”) section, which includes “the most extensive solos for the soprano proctophone in the entire literature.”

The program will conclude with Schickele himself helming the keyboard for the P.D.Q. Bach Piano Concerto, better known by its nickname “Variations on an Unusually Simple-Minded Theme,” where as the Professor’s program notes observe, “They say that the simpler the theme, the more complicated the variations, but that’s just what they say.”  (Dennis Polkow)