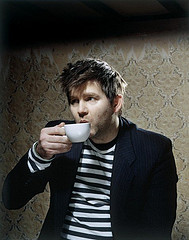 From the start, with the clever (too clever?) “Losing My Edge,” LCD Soundsystem became a tough band to get a wrap around. Riding a near-self-generated wave of the disco-punk revival, Murphy skewered music-influence-name-dropping hipsters with a wit seldom seen in electronic music. Of course, it didn’t hurt that the man at that time most famous for producing the Rapture’s “Echoes” created devastatingly effective music, too. And then, somehow, Murphy the DJ, engineer, producer and musician became dance-rock’s most awkward front man, and LCD Soundsystem grew, from Pitchfork-like cross-over reverence to mainstream full sing-along Lollapalooza highlight (2007). His band’s recently released “This Is Happening” continues Murphy’s evolution or homage or audio collage with great effect, for his genius is forever entwined with his reverence and love for his influences, from the lazy, hazy rhythm and keys of the very Iggy Pop “Nightclubbing” feel of “Somebody’s Calling Me,” to the Talking Head’s polyrhythm-fest of album closer “Home,” which also showcases Murphy’s growth and confidence as a golden-voiced vocalist. But sure, there’s plenty of the snarky speak-singing and howling you’ve come to expect, and from the overt pop of lead single “Drunk Girls,” to dance-floor baptism wrapped in a mid-tempo energizer of album opener “Dance Yrself Clean,” LCD will be a delight to see back in action at the impossibly sold-out Metro. And maybe, just maybe, Murphy and company will deem us worthy of dusting off older, more aggressive favorites, like “Yeah” or “Disco Infiltrator,” or their reworkings of Siouxsie and the Banshees or Carl Craig’s Paperclip People (!), to boot. (Duke Shin)