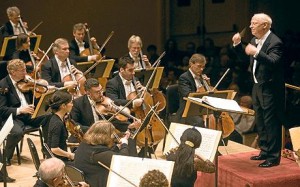 Late CSO music director Sir Georg Solti used to say that a conductor should ideally record three Beethoven symphony cycles during his career: once as a young man, again at middle age and another in old age. Now an octogenarian, CSO principal conductor Bernard Haitink has already made two complete sets of Beethoven symphonies, the set from his years as music director of the Concertgebouw Orchestra made in the 1970s documenting his “middle age” accounts, if we go by Solti’s designations, and another live set made with the London Symphony Orchestra five years ago documents Haitink’s approach at age 75.

Assuming that the CSO wants to release live recordings of the complete Beethoven cycle that Haitink is performing with the Orchestra over the next couple of weeks, what should we consider that set? Post-old age?  Are Haitink’s interpretations likely to be significantly different than a mere five years ago? I am guessing probably not, and thus it comes down to the difference in orchestras.

Ordinarily, the CSO would rate above the LSO because it is a better orchestra, all things considered, despite the British-based Gramophone ranking the LSO higher than the CSO last year. (I am confident that a Chicago-based music magazine would reverse that order with the same level of objectivity.) The x-factor right now, however, after a four-year period where the CSO has had no music director and thus no way to maintain the highest standards given that “guest” conductors, however prestigious and even those given the authority to oversee auditions for new players, are not in a position to address the deterioration of established players. That nasty job falls to a music director, and Riccardo Muti will have his hands full next fall when he realizes the full extent of exactly what he has inherited given that no one has been able to make those calls for such an extended period.

Meanwhile, this “Beethoven Festival,” as CSO management has dubbed the opportunity to experience all nine of the most revolutionary and influential symphonic works ever composed within a relatively short span of time as a grand finale to Haitink’s official time here as principal conductor here—though he is scheduled to return next season as a mere “guest” conductor—begins tonight with a program that, as all of the others except for the Ninth, will juxtapose a familiar Beethoven symphony (No. 5) with a less familiar symphony (No. 8), indeed, if such a designation makes any sense with such a handful of important works. The Overture to “Fidelio” will open the program. (Dennis Polkow)