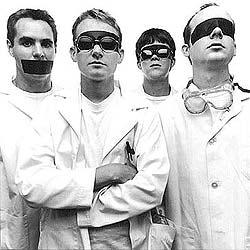 You’ve got to hand it to the folks behind the Downtown Sound: New Music Mondays. Along with booking topnotch up-and-coming talent, they’ve also excelled in creatively booking bands that missed their heyday, or perhaps were gone too soon and unjustly forgotten. Take, for example, the Feelies, who gave a fantastic performance last summer that surely won them new fans who had never heard their work before. Tonight’s headliner perhaps fits the same space, with Hum gracing the Jay Pritzker Pavilion in Millennium Park. Almost fifteen years ago, they were arguably the hardest-rocking band on a heavy-handed Champaign, Illinois indie-favorites bill at Metro (with Menthol and Poster Children) at the height of their Buzz-Binned MTV status, as the loud-quiet-loud buzz-saw attack of “Stars” propelled them to near-rock-stardom. And then, time went by, and Hum was mostly forgotten, discarded along with most of the grunged and alienated remains of the nineties. The great Pumpkin Corgan became a joke, trashing our formative years with his current abomination, somehow tarnishing an entire era, genre, scene… but then, someone started thinking, let’s sell Cadillacs with “Stars,” and somehow, the familiar adrenaline rush from that wall of distorted sound sounded really, really good again—even more striking than Kate Walsh’s slowburn grey eyes and CTS-hawking innuendo. What does this have to do, really, with Hum? Who knows? But what is clear is that tonight’s show will be the rockingest show to date at the Pritzker Pavilion, and it will be good to welcome back an old friend like Hum under the stars. But maybe “You’d Prefer an Astronaut?” (Duke Shin)