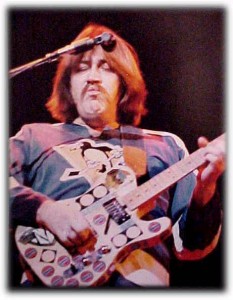 “That cat blows me away: he’s better than I am,” was Jimi Hendrix’s response when he first heard late Chicago (the band) guitarist Terry Kath, when the group backed up Hendrix in its early days. In January of 1978, Kath was killed in a highly publicized freak gun accident, leaving the group paralyzed emotionally and totally uncertain about its future.  Kath had been the musical soul of the band, the glue holding everything together by seamlessly straddling between the brass and rhythm sections. “Terry really drove the band rhythmically, like an engine,” keyboardist/singer/songwriter Robert Lamm told me in 1991. “His importance to this band could never be overestimated.” “In the long run,” assessed Chicago saxophonist and group co-founder Walt Parazaider, “it took many years and two people to fill Terry’s slot.”

That legacy will be celebrated tonight in a special Terry Kath Tribute Concert at Kath’s old high school with original Chicago drummer and band co-founder Danny Seraphine appearing with his band California Transit Authority, and an ultra-rare performance by legendary reclusive producer James William Guercio, who is billing himself more modestly these days as “Jim” Guercio.

The Chicago native worked as a session player, producer and arranger in the mid-1960s and wrote hits for Chad and Jeremy and produced the early hits and albums of the Buckinghams, the first Chicago hit-maker of the post-British Invasion. Guercio also produced the classic 1968 “Blood, Sweat & Tears” album where virtually every track was a hit, and also those mammoth early double albums of his fellow Chicagoans first called Chicago Transit Authority on record, later shortened to Chicago when the real CTA threatened to sue.

It was Guercio who pioneered the notion of group albums being sequentially numbered by Roman numerals, a strategy that he carried over into the motion picture business, and also made the live album a staple of the industry with the multi-platinum “Chicago at Carnegie Hall” with its many posters, programs and political extras, including a handout on how to vote in every state when the voting age was lowered from 21 to 18 before the 1972 election. In case there was any doubt as to how album buyers should vote, an anti-war track encouraged Richard Nixon to quit, more than a year before Watergate had even happened.

Guercio also built the secluded Caribou Ranch studio complex in the Colorado Rockies, which became a legendary haven and icon of 1970s excess and narcissism that was frequented by a who’s who of the industry and after which Elton John named his album “Caribou,” which he recorded there. Guercio would also direct and score the music for the cult classic film “Electra Glide in Blue” where Kath was given the juicy bit part of shooting Robert Blake with a shotgun from a moving van and then given the soulful and haunting vocal on the final song that philosophized about peace.

The proceeds for this special concert—part of Taft High School’s annual “Singsation” show and which will also include performances by Bob Baader and The 95th Street Band and members of the Taft High School Band and Chorus—will go to support the music programs of the high school of which Kath was an alumnus. (Dennis Polkow)