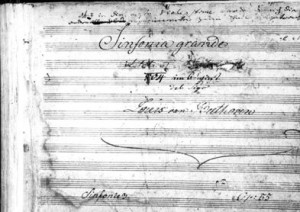 The second program in Bernard Haitink and the Chicago Symphony Orchestra’s traversal of all nine of the symphonies of Beethoven pairs the less familiar Symphony No. 2 with the iconic Symphony No. 3, the “Eroica,” a work that is often cited as making the shift from eighteenth-century Classicism to nineteenth-century Romanticism.

Yet there is already a whiff of Beethoven’s musical revolution in the smaller-scale Second Symphony, even if it came to its full fruition in the large-scale Third Symphony, an avant-garde work that occupied Beethoven for five years and indeed broke every convention of the Classical era. Critics and audiences did not know what to make of a work that, for starters, was more than twice the length of any symphony of Haydn and Mozart. But its real revolution is what Beethoven did with the stalwart sonata form that had so dominated the era, the ABA form of exposition, development and recapitulation which in Beethoven’s hands are blown up and the pieces sometimes scattered almost beyond recognition.

Beethoven originally dedicated the work to Napoleon Bonaparte but notoriously scratched the dedication from his manuscript with a knife when he learned that Napoleon had proclaimed himself emperor. With its unconventional slow movement funeral march—a piece still commonly used for state funerals and the first slow movement in any Beethoven symphony—Beethoven later described the piece as a symphony on the “death of a great man,” later settling for the simpler description of “heroic,” in Italian, “Eroica.”

On Haitink’s most recent recording of the “Eroica” with the London Symphony, tempos are brisker than his earlier account with his own Concertgebouw Orchestra, which is definitely more in line with Beethoven’s stated intentions. It will also be interesting to see if Haitink will observe all of Beethoven’s marked repeats which are necessary to give the work its proper proportions and balance; in Beethoven’s mind, at least, this was still a “Classical” work, albeit a revolutionary Classical work. The full-blown Romantic movement that would be so unthinkable without Beethoven was still in the future even if Beethoven tends to be viewed in hindsight as primarily scattering the seeds for the future rather than culminating the past; the reality is that he did both.  (Dennis Polkow)