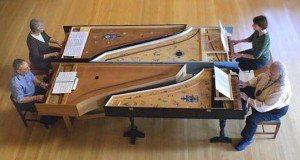 Professional eighteenth-century musicians were more diverse in their talents than musicians of our own time; you not only had to be able to perform on a wide variety of instruments but you were also expected to read any music given you as well as be able to improvise. You also were expected to compose music as well as be able to arrange music of your own or of others for additional performers as occasions and circumstances warranted.  Thus, few of Bach’s harpsichord concertos were initially written for that instrument, but were actually arrangements of other pieces he had written but which often survive only in their harpsichord versions.

Baroque Band’s season finale includes two such Bach works that involve multiple harpsichords: the Concerto for Two Harpsichords in C Major (BWV 1061), thought to have originated as a two harpsichord piece but later augmented with strings, and the Concerto for Four Harpsichords in a minor (BWV 1065), thought to be the only Bach harpsichord concerto that made an adaptation of someone else’s music rather than his own, in this case, the four violin concerto in b minor from Vivaldi’s “L’Estro armonico.” Baroque Band principal harpsichordist David Schrader will be joined by Jason Moy for both works, with Paul Nicholson and Alex Kelber joining them for the Four Harpsichord Concerto. Violinist, group founder and artistic director Garry Clarke directs the program which also includes Wilhelm Friedemann Bach’s Overture in g minor, formerly attributed to his father, and Graun’s “Le Fete Galante” and Graupner’s Concerto Grosso in B flat major.  (Dennis Polkow)