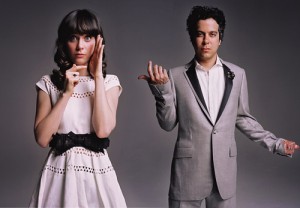 If you don’t know who “she” is, now is a good time to learn—singer/actress Zooey Deschanel makes up one part of indie-folk duo She & Him; her other half is singer and guitarist M. Ward, also of Monsters of Folk. Together, the two bring their insanely contagious sound to Millennium Park’s Jay Pritzker Pavilion.

Deschanel is one of the few lucky ones to overcome the actress/musician curse—yes, I’m looking at you Joaquin Phoenix. She writes almost all the songs, plays loveable characters in movies like “Elf” and “500 Days of Summer,” and looks adorable in everything she wears. The impossibility of ever being her friend makes me mildly bitter. Her sound though, is just the opposite: breezy and charming, the lyrics are pulled over M. Ward’s guitar like sweet taffy.

Their first album “Volume One,” was released in 2008 with a name just as unassuming and modest as their rise to fame, which was first attained with attention from gigs at San Francisco’s Noise Pop and Austin’s SXSW. It’s difficult to fit the tracks into one neat genre, jumping across folk to country to retro pop to jazz.

One thing’s consistent: listening to songs off “Volume One” is like floating down a lazy river or soaking in a warm summer rain—hearing M. Ward’s raspy back-vocals and Deschanel’s dreamy harmony makes even the saddest songs feel like everything is going to be just fine.

Released just last March, “Volume Two” has an equally nostalgic tone, continuing to pay appreciation to music history, this time by covering Skeeter Davis’ “Gonna Get Along Without You Now” and NRBQ’s “Ridin’ In My Car.” For all that their look and sound appears retro, the two are equally unique and fresh. Not too sunny, never too dark—we can only hope that romantic haze translates live at their free concert with local garage-pop band Hollows this Monday. (Dee Fabbricatore)