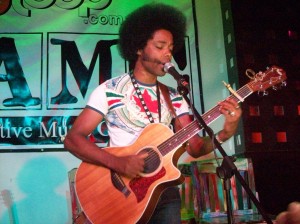 The Cuban-born Latin funk guitarist has strong stage charisma and great guitar skills that recall the likes of George Benson, Carlos Santana and Stevie Ray Vaughan all wrapped up in one concise package. Though highly disciplined in his playing, Cuba at times surprises the audience with spontaneous explosions of improvised guitar riffs and solos that bring to mind—along with his seventies-inspired look—a bygone era of risk-taking guitar heroes.

On his 2009 tour, Cuba was backed by a very tight band formed by Robert Johns (electric bass) and Robert di Pietro (drums) that showcased his intriguing mix of Afro-Cuban beats with jazz, funk and rock. His performances are fiery but also intimate, as he often interrupts the set to requests from the crowd, who shout for tunes from his debut release “Agua del Pozo,” which dropped stateside in 2009 after much networking around industry events for a couple of years (having been the opening act for Aterciopelados certainly helped). Cuba’s undeniable talent and charm make him one of the Latin Alternative acts to watch for this year. (Ernest Barteldes)