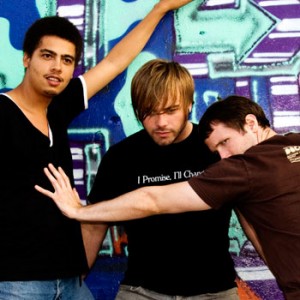 Techno and pajamas make a lot of sense, sometimes… It gets late, you’re out somewhere after, probably still up and havin’ it…might as well throw on the PJs. But if you’re putting on a pajama-themed day-party in the heart of Trixieville with two of Detroit’s finer young bucks in Lee Curtiss and Ryan Crosson, well, that’s an entirely different plate of wax! Crosson, as a producer, covers a lot of range, excelling with clicky, clacky, nuanced grooves on labels like Trapez, Spectral and Wagon Repair. But at his best, he creates engaging tracks with plenty of darker, dubby influences, but somehow managing to keep the mood sexy, like on “Confiteria del Molino” and “I Love My Lonely.” More recent releases seem to show a trend to the deeper end—much like Curtiss, who craftily balances his younger influences from both Chicago and Detroit. Both men have spent a bit of time collaborating and partying in Berlin (along with Seth Troxler), and they do seem to reflect a similar aesthetic. But for an affair like this one, who knows what will get tossed out there. “Get your freak on, get it on…” urges Curtiss in a recent favorite released earlier this year (“Freak On,” Get Physical). With the infamous Glitter Guts photo booth on hand to document the fun/carnage, I’d have to wholeheartedly agree. Additional deck support provided by Phil Stone and David Yang. (Duke Shin)