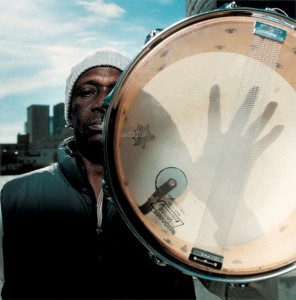 The distinctive drumming of Tony Allen has enjoyed a popular resurgence of late, and the Parisian-by-way-of-Nigeria has been enjoying the rewards. Initially gaining exposure as Fela Kuti’s bandleader and drummer, Allen split from Kuti’s Africa 70 outfit in 1979, but would continue working to define the new afrobeat sound that has defined his legacy. Now pushing the age of 70, Allen has found a second life recording and collaborating alongside musicians half his age. Sébastien Tellier employed Allen on his impossibly beautiful “La Ritournelle,” and Damon Albarn (who famously sang “Tony Allen got me dancing” in Blur’s “Music Is My Radar”) later tapped Allen for his criminally underrated The Good, The Bad & The Queen supergroup (along with Clash bass player Paul Simonon, Verve guitarist Simon Tong), whose self-titled 2007 album was among the year’s best. Allen’s latest solo album “Secret Agent” was finally released stateside on Nonesuch Records in April after garnering positive acclaim in Europe last year. “Secret Agent” was recorded with Allen’s touring band whose instrumentation combines expected funk/jazz/afrobeat elements with some unexpected ones, like the accordion and vocoder. Also performing tonight are tuneful Toronto folkies Great Lake Swimmers. So come early for the strumming and stay later for the funking with another great evening under the stars for the Downtown Sound: New Music Mondays at the Pritzker Pavilion. (Duke Shin)