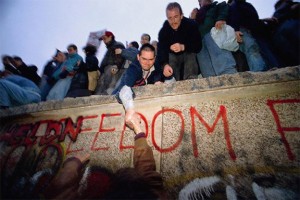 As Bernard Haitink brings the Chicago Symphony Orchestra’s three-week Beethoven Festival and his four-year principal conductorship to a close this weekend with performances of the Beethoven Ninth Symphony, it is fascinating to note how much this music has been associated with historical events in modern times, for better and for worse, on all sides of the political spectrum.

The “Ode to Joy” finale of the piece, which speaks of the brotherhood of man to poetry of Schiller, continues to serve as the official Anthem of the European Union. Yet the same piece was also a favorite of Adolf Hitler’s, and there were frequent performances of the entire work with the Berlin Philharmonic under Wilhelm Furtwängler to mark special Nazi celebrations, such as the Führer’s birthday. Almost as quickly, once the Allies had defeated the Nazis and were occupying Germany, performances of the Ninth were used to help restore hope for German civilians. A young and future CSO music director Georg Solti—himself a refugee during the war in Switzerland—led a performance sponsored by the American Army in war-torn Munich that was broadcast across Europe in the months after the war.

During the Cold War, the Ninth was appropriated by both sides of the Iron Curtain, and most curiously, was used at a reunification concert that included musicians from American, British, Russian, French and both East and West German orchestras, a month after the Berlin Wall fell, for a Christmas 1989 concert that was conducted by Leonard Bernstein. Bernstein altered Schiller’s text so that the word “joy” (“Freude”), so prominent in the finale, was exchanged for “freedom” (“Freiheit”) and the concert was broadcast and televised live across the globe.

Even the invention of the compact disc was influenced by the length of Ninth Symphony: it had originally been conceived as being able to hold an hour’s worth of music, but since the Ninth can be as long as seventy-five minutes depending on tempo choices, the CD was given a wider diameter to be able to accommodate the work on a single disc.

Like Haitink, Daniel Barenboim chose to end his CSO tenure with the Ninth, and concluded that performance by walking around and publicly offering long hugs to each and every member of the orchestra. Solti performed the piece four times across his twenty-two-year music directorship, and two of these were recorded, the first setting new standards for the quality of choral singing from Margaret Hillis’ Chicago Symphony Chorus; Hillis had always been a stickler against the conventional wisdom that Beethoven did not know how to write for the voice after he was deaf and, encouraged by Solti, was determined that even the highest vocal sections would be sung with perfect execution, diction and pitch, which had been a rarity until then.

What to expect from Haitink’s performances of the Ninth?  Undoubtedly the same high quality and musicianship that has marked each entry of his Beethoven Festival, but it will be interesting to see how large of an orchestra and chorus that he decides to use (he has been using mid-sized orchestras throughout the festival) and what tempo and dynamic choices he will make. If the series thus far is an indication, expect a moderate first movement, a ferocious second movement, a faster adagio with raucous horn contributions and a carefully layered, virtually transparent finale, which will include soprano Jessica Rivera, mezzo soprano Kelley O’Connor, tenor Clifton Forbis and bass Eric Owens.  Tickets will be scare for these performances, but note that it is summer and Father’s Day weekend, so turnbacks should be available for the patient and persistent.  (Dennis Polkow)