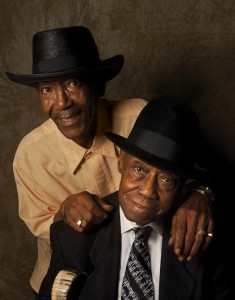 Pinetop Perkins is a true Chicago legend. At 97 years of age and still going strong, he is one of the few musicians alive today whose roots can be traced directly to the Delta Blues days of Robert Johnson. He continues to record and perform regularly, and after 2008’s great “Pinetop Perkins and Friends” (Telarc, which featured Eric Clapton, B.B. King and others), he is joined by yet another legendary figure, harpist Willie “Big Eyes” Smith for “Joined At The Hip” (Telarc), their new CD together.

Though born in Arkansas, the 74-year-old harpist and drummer has called Chicago home since he was 17 years old. During his long career, he recorded with the likes of Bo Diddley and was (with Perkins) a longtime member of Muddy Waters’ band until 1980, when he, Perkins and other musicians struck out on their own to form The Legendary Blues Band. Since the group disbanded in 1993, he and Perkins have collaborated in each others’ recordings—Perkins played on Smith’s 1995 “Bag Full of Bones” and more recently on 2006’s “Way Back,” but this is the first album credited to both as bandleaders.

This is a rare opportunity to hear Perkins in Chicago. He moved to Austin a few years back, and rarely travels outside of Texas to perform, which makes this a show not to be missed. (Ernest Barteldes)