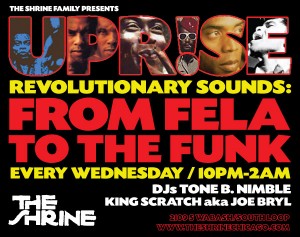 After a six-month music sabbatical in Argentina, former Sonotheque owner Joe Bryl (DJ King Scratch) is back on the scene, this time curating “UPR!SE: Revolutionary Sounds From Fela To The Funk,” a weekly African-rooted residency at The Shrine, 2109 South Wabash, with DJs Tone B Nimble and King Scratch.

Bryl is no stranger to Afrobeat: he was the first DJ ever to play a set at Funky Buddha Lounge and has been interested in the genre for all of his twenty years in the industry, taking cues from artists like Fela Kuti, Miles Davis, James Brown and George Clinton.

“The difficulty I have with the DJ construction is that everything is sometimes looked through a prism of what is presently occurring, and not showing cultural connectivity over time,” Bryl says.

UPR!SE proves timely in the midst of a recent movement toward melding American and African music, especially with labels like Soundway and Analog Africa releasing long-forgotten gems from Africa circa 1970.

Bryl hopes that his latest project, which runs Wednesdays from 9pm-2am, will hold far more value to Chicago than any normal weekly DJ residency.

“This is a divided city still,” he says. “There are certain people who live in Hyde Park and Pilsen and won’t go past North Avenue, and people from the North Side that don’t go past Roosevelt Road. Hopefully we can make a movement to connect these divided parts of the city together, to be racially inclusive.” (Dee Fabbricatore)