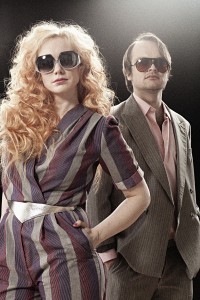 In vinyl days, it was not unusual to switch between an album and a single on your turntable, forgetting to speed up the player. The result was to play music dramatically slowed down, usually creating a strange sound. Occasionally, though, you wouldn’t necessarily notice it was off, since the music sounded so good at a slow tempo. Norway’s Susanna and the Magical Orchestra, visiting Chicago on its first-ever tour of the States, sounds like a 78 RPM played at 33, so measured is the pace of the songs. And this is a good thing, if you’re wondering.

Susanna Karolina Wallumrød was born with tears in her voice. Her beautfully melancholy instrument fills the air in this ironically named ensemble of two; she’s accompanied by the acoustics provided by keyboard player Morten Qvenild. The vocals are pushed to the top, almost a cappella, resulting in a haunting, despair-laced effect, put especially to enchanting use in unexpected covers, such as Joy Division’s “Love Will Tear Us Apart” or Bob Dylan’s “Don’t Think Twice,” both from 2006’s all-covers release, “Melody Mountain.” Trust me, though, you’ve never heard covers like this; a musician friend couldn’t even name familiar songs given the glacial tempo. The band’s latest release, “3,” moves on from familiar covers into a compelling assortment of originals, but retains the heartbreak.

It’s worth noting the difficulty in categorizing this music. Sure the rock covers and indie patina make it a natural for Schubas, but in some of its North American markets on this tour, they’re playing jazz festivals. Some things just can’t be filed away. (Brian Hieggelke)