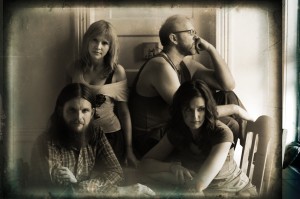 Eric Bachmann has had a rare career in which he’s fronted two different exceptional indie-rock acts. First, he led nineties rockers Archers of Loaf; ultimately underrated, Archers of Loaf’s “Icky Mettle” and “All the Nation’s Airports” are two of the finest albums from that era of the genre. Crooked Fingers, Bachmann’s second-act move, has mostly been criminally underrated—rather than howling his muscular growl over punishing power chords, Bachmann’s turned down the volume and embraced his Neil Diamond-like croon, sticking closely to acoustic guitars, often nylon-stringed with a Spanish tinge. The band’s five records are very different from each other but all indentifiably Bachmann—the man’s a sentimental, singular force and his heart-on-sleeve approach suits him. The band’s last record, “Forfeit/Fortune,” featured guests from DeVotchka and vocals from Neko Case, whose duet with Bachmann, album-closer “Your Control,” sounds like New Order funneled through Springsteen. “Let’s Not Pretend (to Be New Men),” with its haunting melody and staggering fiddle solo, is another highlight. Live, Crooked Fingers has never disappointed, and the last time I caught the band at Schubas, Bachmann pulled out some Archers material much to the crowd’s delight. (Tom Lynch)