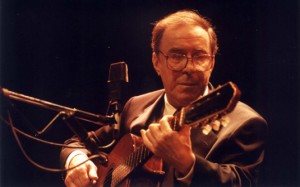 Note: After we went to press, the CSO issued this statement:

The concert will not be rescheduled. Refunds will be automatically processed to the purchasers’ original method of payment. Ticket holders should direct all questions to (312) 294-3000.

More than five decades ago, Brazilian label Odeon (an EMI subsidiary) released an inconspicuous 78 rpm record by then-newcomer João Gilberto, with the blessings of A & R man Aloysio Oliveira and Antonio Carlos Jobim, who was then making his name as an arranger and songwriter. One afternoon in July 1958, Gilberto entered the studio to quickly record “Chega de Saudade,” an early Jobim/Vinicius de Moraes collaboration.

At the time, few of the participants thought much about it—as journalist Ruy Castro explained in “Bossa Nova: The Story of the Brazilian Music That Seduced The World” (A Capella Books, 2000), the label was pretty much trying to find something new to attract younger generations in Brazil, and that was what Gilberto represented with his quirky way singing and playing guitar. This was a radical change of pace—out were the powerful voices of Sinatra wannabes, and a quiet revolution, with Rio de Janeiro at its center, began to take place.

Fifty-plus years on, Gilberto’s creation, bossa nova, is alive and well: his concerts always sell out to audiences young and old, who always receive him with a standing ovation, as happened at New York’s Carnegie Hall in 2008. Fans know exactly what to expect from him: a selection of songs by Jobim, Carlos Lyra, Vinicius de Moraes and Ary Barroso played in his unique, subtle manner. (Ernest Barteldes)