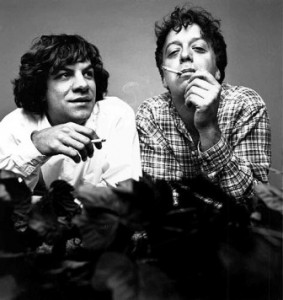 Some years ago, I took a road trip with a friend through the East Coast, and on one night we found ourselves in New Hope, Pennsylvania, a quaint, quietly mysterious town we just happened to stop in on our way to New York. New Hope happens to be the birthplace of long-running psych-pop band Ween, and let me tell you—New Hope loves its Ween. Ween posters were plastered everywhere on windows—coffee shops and record stores, sure, but also B&Bs, the grocery store, the dentist’s office. I’ve never seen a town so proud of two of its boys. Since Gene Ween and Dean Ween formed, uh, Ween in the late eighties, the band has taken on a sort-of-cult status over the years, drawing large crowds to shows while keeping relatively under the radar with releases. (“Push Th’ Little Daisies” from 1992’s “Pure Guava” was surely the band’s biggest hit.) The band is “connected with drug culture,” you could say, and laces the theme throughout its records. The last full-length was “La Cucaracha” in 2007; it was only so-so, but literally everything the band released in the nineties was dirty, oddball fun. (Tom Lynch)