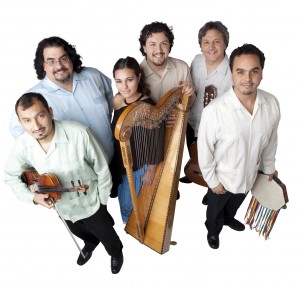 Chicago’s Sones de Mexico is not your your everyday traditional Mexican group. For starters, they do not dress in those elaborate outfits that most of us identify with our south-of-the-border neighbors, nor do they perform only Mariachi music. Also, they are not solely a musical group but also an educational institution dedicated to preserving and spreading the musical and cultural traditions of their country both to second- or third-generation Mexican-Americans and to world-music-loving Anglos as well.

Since their inception back in the spring of 1994, Sones de Mexico Ensemble have been pretty daring. For instance, they included retooled versions of Led Zeppelin’s “Four Sticks” and Bach’s “Brandenburg Concertos” on their 2007 Grammy-nominated disc “Esta Tierra Es Tuya (This Land Is Your Land).” On their latest release, the two-disc “Fiesta Mexicana,” they went into a markedly different direction by making a double bilingual disc geared to young children, with short explanatory narratives between the tunes.

“The band started in Chicago in 1994,” explains Juan Diés. “Victor Pichardo and I were the co-founders. We had a career in music independently before we met, and he had an interest in forming a band. I had a few gigs myself playing corridos [a popular form of narrative ballad that traces its origins from the Spanish colonizers] in an art gallery in the Pilsen neighborhood here in Chicago, and I brought a friend and he brought a friend of his, and there were four of us playing music together. We played a little set and the people just went berserk—they started asking for business cards, asked where we were playing, what the band’s name was… We didn’t have answers for any of those questions. Immediately I printed some business cards and for the rest of the year we got more than forty gigs and then every year after that the group started developing.” 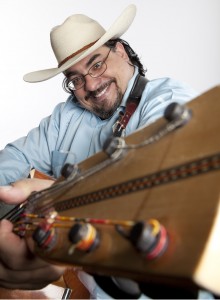 Diés(who was born in Mexico) moved to Chicago that same year after graduating from the University of Indiana, when he was hired for a position at the Old Town School of Folk Music. “We were all involved in education in different ways,”Diés explains. “In 1997, we decided to incorporate as a nonprofit organization so we could have a better position as an educational company preserving these styles of music, and so from then on we operated as a cultural organization. I finally left my day job in 2005—we’d already recorded two albums, and that year I went full-time with the group as a producer, executive director with the organization while still playing in the band.”

Since the band’s beginnings, they have been committed to performing in local schools, and this educational/entertainment concept finally made its way to the recording studio. Diés’ idea was that they “had been playing it for fifteen years, and we should memorialize it and put it on an album available to people who don’t necessarily have a chance to hear us.”

The disc is a journey through various musical styles from Mexico with spoken-word interludes that teach a bit about the origins of the different instruments, Aztec myths and also the diverse amounts of genres from that country. Among the tracks are several traditional numbers, including two versions of the classic “La Bamba:” one played as a rock song (in Ritchie Valens’ 1959 arrangement) and one as a son jarocho, as the tune has been played for centuries.

“’Fiesta Mexicana’ turned out to be a double album because there is so much material, and we couldn’t decide whether to make it in English or Spanish, so we did one in each language,” he says. “What I wanted to do was to give kids the opportunity to take two different paths and get to the same place.”

“This is not necessarily aimed only at Mexican kids,” he says. “This is also intended for children who are growing up around Mexican kids and want to share into that culture and learn about it, so they can listen to the record in English and understand what the Spanish one is about.”