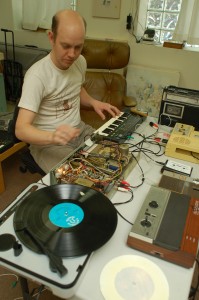 Nick Butcher is always working. He works across fields, with a visual art practice, he co-runs an independent print shop, Sonnenzimmer, with his ongoing collaborator Nadine Nakanishi, and he makes music. When he performs, he sits at a table with a plethora of curious objects: the guitar is the most recognizable, the others—electronic boxes, sticks, static surfaces—he collages together, creating walls of changing, textured sound. His two records, “The Complicated Bicycle” and “Bee Removal,” are available on Hometapes and in commemoration of a five-year anniversary since the release of “The Complicated Bicycle,” Butcher is re-releasing the record with a bonus disk containing new tracks, and performing at the Empty Bottle.

“For me the best art and music just happens,” he says. “It happens in that space where you weren’t thinking, that could be a doodle or it could be a few random notes played on a guitar. There is something that happens in that unconscious moment that I can’t quite put my finger on. There is an utter honesty to it that I find really cool. For me, this intuitive approach is the closest I can get to understanding how the world works. Because for that brief moment, I feel connected to something larger, outside of myself. So, for me, making music is a way to harness those moments and shape them into something further. To do this I use the crappiest equipment around. A cheap sampling keyboard (Casio SK-1) and a few cassette-tape recorders with handmade cassette tape loops in them. For source material, I use an acoustic guitar, or found sounds. Doors closing, coins spinning, etc…This allows me to record snippets of sounds intuitively onto the loops which, when played back, arrange themselves into repetitive patterns, unveiling the underlying structure. From there I add and subtract accent notes on the keyboard or guitar, then record another loop to play along with the first one. There’s not really an end point in mind, just a continuous morphing song cloud that shapes and shifts as it moves along. For my recordings, I take the same approach, but dump stuff onto a computer to be further edited into more focused compositions, which also allows room for incorporating beats, key changes, etc. For this reason, my performances and the recordings are two different yet connected things.” (Caroline Picard)