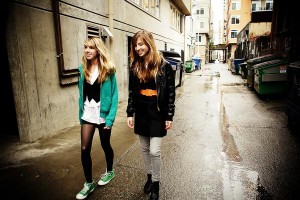 The kids in Seattle trio Smoosh have the sort of defining trait that people must  immediately mention (for the next few years, at least) whenever they’re brought up—that they really are mere kids, the oldest, Asy, just now turning 18, despite a whopping ten years in the music business. As remarkable of a storyline that provides, it’s disappointing how pretty unremarkable Smoosh’s music is—never the spectacular disaster one expects from a group who’s median age is 16, but never the prodigious genius music fans secretly hope to come across. Produced by Death Cab For Cutie drummer Jason McGerr, the group’s 2006 record “Free To Stay” pushed tight, piano-driven pop, which ended up sounding like Mates of State with a 14-year-old singer.  Four years and a little high-school education later, Smoosh returns later in 2010 with “Withershins,” and early indications show the band is still majorly talented and amazing proficient for their relatively young ages, but the soul of the music is still not nearly compelling enough for anyone under 17 to pay serious attention. (Andy Seifert)